This is the first version of the renewed Advanced Heroquest revision, AHQ3.0: the game has been deeply revised with the replacement of all the tables with Decks-based dynamics. All the material included is original and not scanned from the original game: no copyright issue at all :D

A set of starting Heroes is included, but they can be easily created and customized following the Rules on the website with the relative card template to be modified and imported in game.

The minis (part of the Minimalistic Fantasy Minis) are included with the AHQ stats on their base, to allow a quicker flow of the game. Any suggestion and contribution is welcome. 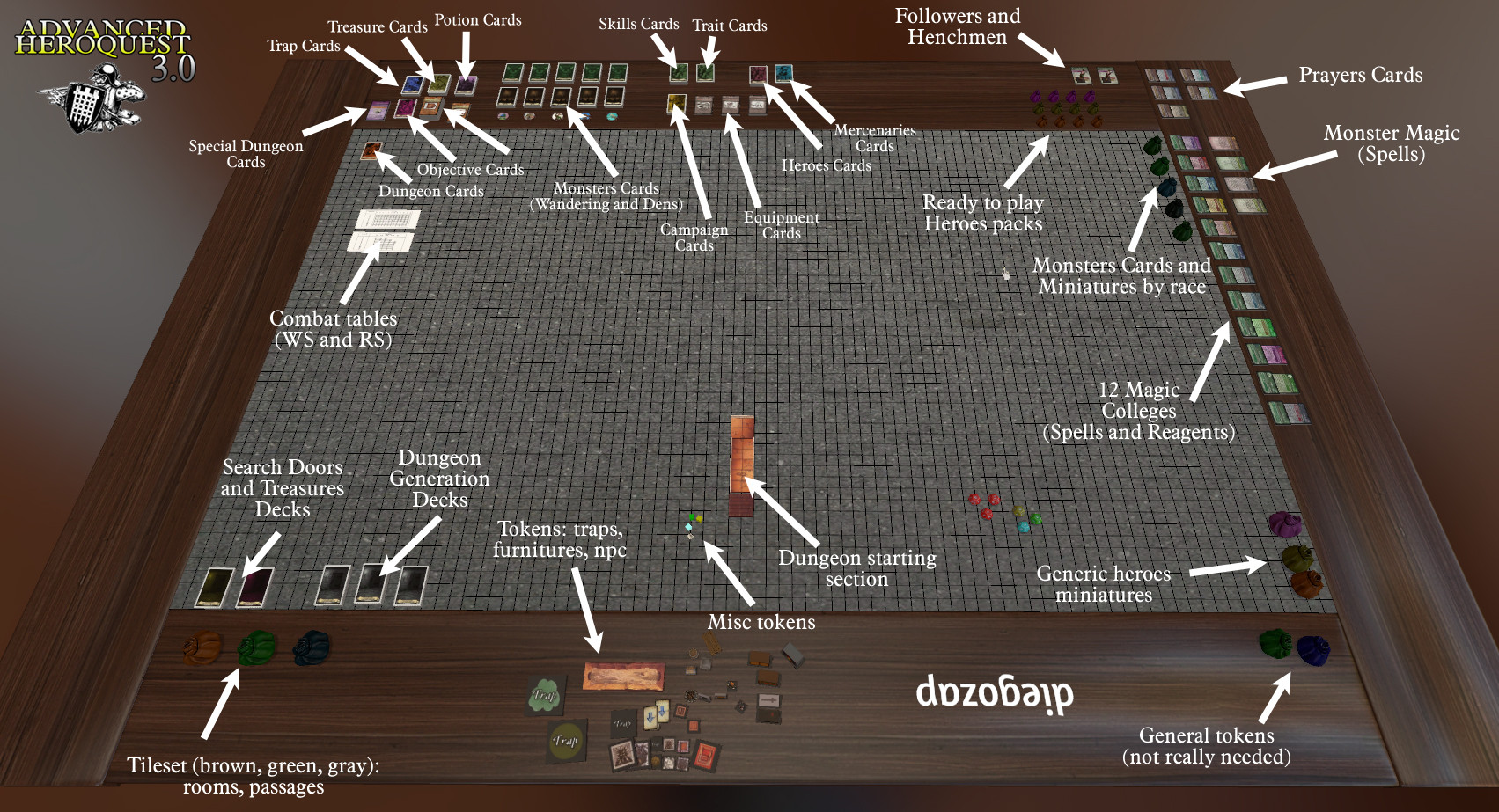 1. For first give to the players their Heroes and Henchman: there are 12 starting Heroes included, but you can create your own following the Rules of the website: in this case use the following photoshop Template to fill information in your Hero Card, then import the card with the following BACK.

Each Hero Bag contains the Hero mini and the Cards of the Hero (Hero Cards, Skills Cards, Equipment Cards): note that the mini contains in the name all the main stats: Name WS/RS TH SP DD Wounds.

Complete the party with Henchmen if necessary, Henchmen cards and minis are near the Heroes bags. If there are Mage Heroes assign properly Spell Cards and Reagents Cards.

2. Now go to the Objective Cards deck: this card selects the Dungeon, the Monsters and the general flow the game. Shuffle and pick a Card: this will determinate how to build your dungeon.

In this example we picked the Skaven Albine Mage objective card: the Card says we have to select the Skaven Monsters Decks, that the Dungeon is composed by 30 Rooms Cards and indicates the Tileset to use (standard green). Place the card on the top of the game table and let's build the Quest.

3. For first go to the Monsters Decks, unlock and select the Skaven ones and place them on the game table: these are the Wandering Monsters Cards and the Dens Cards.

Shuffle the 31 cards and select this deck as Rooms Deck for the Quest. We have now all the basic Cards for our Quest.

Shuffle the Magic Treasure, Traps, Treasures and Potion Cards: we'll use this standard Decks as no Expansion has been released yet :)

We select the Green Tileset as indicated by the Objective Card: the tiles are in the proper bags, it's useful if we take all the pieces to be ready to place them during the game.

Now we can place the starting part of the Dungeon, that is always a stairs, a passage and a T junction. Place the party on the stair tile and you are ready to go.

To generate passage sections use the proper decks, and so to search Secret Doors and Hidden Treasure.

When you have to generate a passage, pick the three dedicated decks (Lenght, Content, End), shuffle at the same time, then flip each of the deck to check the result. In this example we have a passage 2 long, with two doors, ending with a T junction (be sure to not combine lenght, content and end decks!):

NOTE: when placing passages, be sure to place always a 2x2 junction when they are longer than 1 passage, as in the following example (to avoid problems in placing rooms):